After the Total Transformation that happened so quickly on demo day, things have been creeping along.  The electrician came in and did a few things, a new footing was placed under the house for additional support beneath one side of the new opening, then we had to wait on a couple inspections to take place, and finally the dry wall was put up.  With the drywall, you can really start to see things coming together! 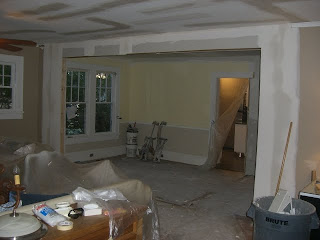 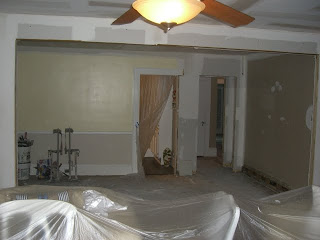 The electrician moved the chandelier wiring over a little bit since the dining room is so much bigger now.  We decided not to put it exactly in the center of the room though, since the dining table will still need to be placed slightly off center to create an easy walk way to the kitchen.  You can also see in the pictures below that we actually added a layer of drywall to the dining room ceiling.  This is part of our plan to conceal the attic pull-down, which I'll explain more in another post. 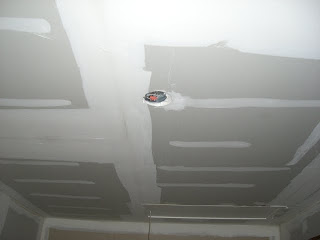 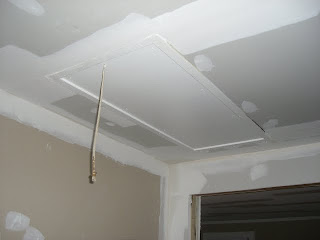 The electrician also had to find a spot for the switches and outlets that were in the old wall.  They actually had to add some extra outlets (bonus!) just to meet today's codes which this 1930's house never met before.  The doorbell, alarm system, and smoke detector also had to be moved.  The smoke detector change actually caused some drama by going off a couple of times in this process and dispatching the fire department.  After the second time the fire men showed up, I finally figured out how to reprogram my alarm system so that it wouldn't go off anymore. :) 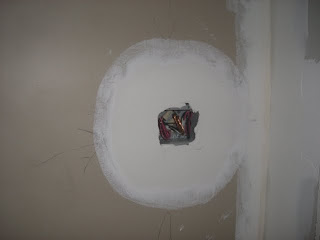 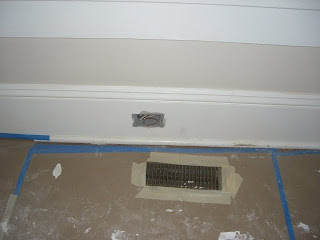 So, by now you may be wondering what is going on with that new doorway at the end of the old hallway.... 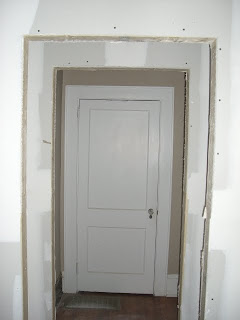 In order to really define the dining space and remove the look of the hallway, we wanted to put another doorway parallel to the kitchen door which would make the space perfectly square. The problem was that the hallway turns the corner towards the bedrooms just a foot or so past that. So, if we just did a normal doorway, it would have felt awkward because the corner of the wall would be too close. Luckily, Matt thought of an amazing idea -->  Extend the doorway all the way to the corner, and add bookshelves on either side of the doorway to give it purpose and tons of character. I love this idea because it is so unique and also gives a little bit more of a seperation between the living space and bedrooms. So far, this little nook has been framed, drywalled, and the electrician added a recessed light in the ceiling. 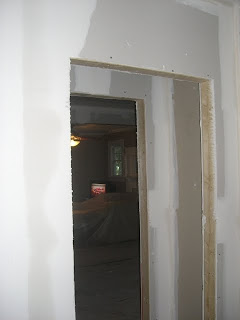 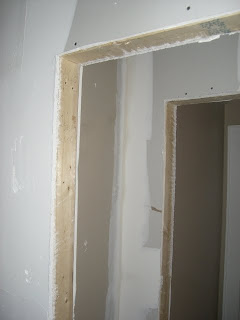 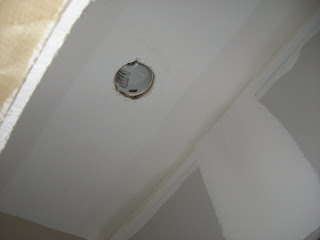 Still can't envision it?  Check out this picture from houzz.com, one of my favorite places to find inspiration.  Now imagine something like that on both sides of the doorway.  Pretty cool, right?
So, while all this work has been going on at the house, I've pretty much just been day dreaming about how to decorate once it's all done.  I found some pretty pillow covers on sale for only $19.99 each at Pottery Barn the other day.  Looks like PB.com is sold out of them now because they no longer show up on their website, but you can still find them on eBay by searching for Pottery Barn Brighton Pillow Covers.  For some reason, they reminded me of something Sarah would like from that HGTV show, Sarah's House.  Anyway, they served as my inspiration for this little mood board I put together for fun.  I also used a couple of the items that I loved from Michelle's Beach Condo Design. 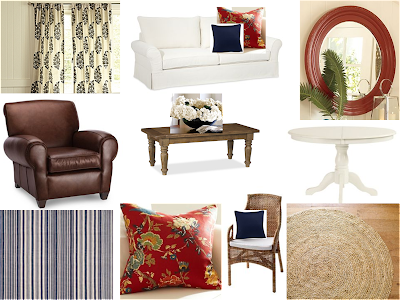 Can you guess where some of these items are from? :)
Posted by Renee at 10:25 PM

Renee
Charlotte, NC, United States
Hi everyone! Welcome to the Charlotte Cottage! I started this blog because I am passionate (ok, maybe slightly obsessed) with home design and decorating. I live in a small 1931 home in one of Charlotte's historic neighborhoods. This home has given me a new appreciation for the quirky character of older homes and has inspired me to try all kinds of DIY projects. I hope you get inspired as well, enjoy!!