During my lunch break today, I took Baxter for a walk/run and brought along the camera so I could get some shots for my Seasons in Plaza Midwood art project.  As you may remember from that post last November, I've already collected some shots during the Fall and Winter months, so I wanted to be sure and get some of the Spring before too late.  The early Spring bloomers, like the cherry blossoms, are already starting to fade, so I knew my time was running out.  Spring is never long enough!  Luckily the dogwoods are just about at their peak, so I was able to get this great shot by the church near The Plaza and Central Ave.  If you look closely, you'll see Baxter relaxing on the stairs as he patiently waited for me to take the pics, what a good boy :) 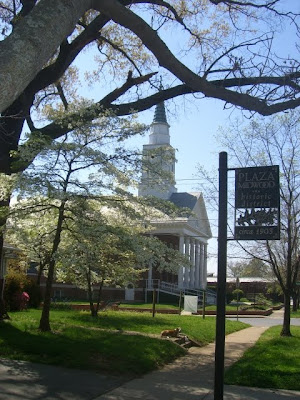 While I was out, I also snapped a shot of this cool historic house on The Plaza... 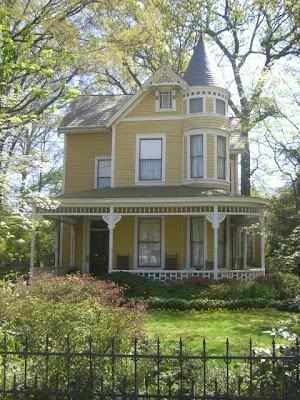 I heard that it was moved from the 4th Ward to this location years ago, so I did a quick google search on it and found this great article about it's history. Here is a little exerpt from that Carolina Corner article...
"...the grand houses that once graced the North Tryon corridor gave way to commercial development as the uptown area spread. Victoria escaped demolition, thanks to the owner's decision to move it to Plaza Hills [now known as Plaza-Midwood].
The plan to relocate the house all the way across town was a big risk. The developing neighborhood lay at the end of the streetcar line, way out in the country.

The move, which took place sometime between 1910 and 1920, would impress even modern professionals. Horses pulled the two-story house intact, rolling it over logs for about 10 miles to its new site."
Posted by Renee at 3:31 PM

Renee
Charlotte, NC, United States
Hi everyone! Welcome to the Charlotte Cottage! I started this blog because I am passionate (ok, maybe slightly obsessed) with home design and decorating. I live in a small 1931 home in one of Charlotte's historic neighborhoods. This home has given me a new appreciation for the quirky character of older homes and has inspired me to try all kinds of DIY projects. I hope you get inspired as well, enjoy!!